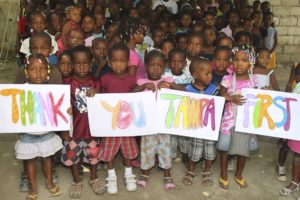 All the schools that we sponsor are approved by the Ministry of Education under the name Ecole Mixte Nazareth. They are located in the poorest neighborhoods of the city of Port-au-Prince. The Souvenir Children Foundation of Haiti, Inc was named after Souvenir Simon Jean Baptiste, a dedicated Haitian educator who founded the Ecole Mixte Nazareth 50 years ago. Over the years this primary school has provided a solid educational foundation to countless young people who have progressed to become productive members of Haitian society. Some of them today are working in Haiti in various fields including Medicine, Banking, Law, Education…It currently has about 200 students. This school has consistently a 100 % passing rate on the “ Certificat “ which is a national exam given at the end of the primary school cycle in order to move to the secondary school level.
The Ecole Mixte Nazareth,4 eme Ave de Bolosse was started in 2011.The school has been growing rapidly. Every year a new class is added. It currently has about 150 students. 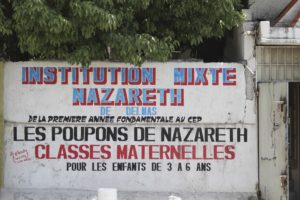 This program is the early stages of development. The aim is to give marketable skills to young people that can lead quickly to a job. So far there is a program for preparation in the trades of electrical work, sowing, cosmetology and culinary arts. The students meet on a weekly basis in the building of the Ecole Mixte Nazareth, Delmas. There is about 10 students in this program. They are highly motivated. The goal is to expand the program into other areas such as computer technology.

In collaboration with an ONG there is a program for adult literacy which has been in existence for over 20 years. Many people have come to achieve functional reading skills through this program.