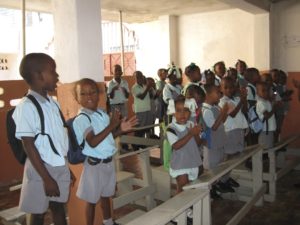 All the schools that we sponsor are approved by the Ministry of Education under the name Ecole Mixte Nazareth. They are located in the poorest neighborhoods of the city of Port-au-Prince.

Over the years this primary school has provided a solid educational foundation to countless young people who have progressed to become productive members of Haitian society. Some of them today are working in Haiti in various fields including Medicine, Banking, Law, and Education.

It currently has over 200 students and maintains a 100% passing rate on the “ Certificat “ which is a national exam given at the end of the primary school cycle in order to move to the secondary school level. 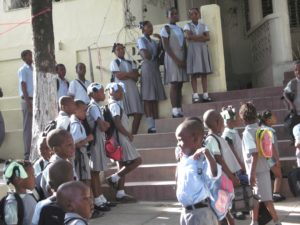 We not only provide quality teachers for student, but also build and renovate the facilities for the children.

We routinely send large-caring groups of volunteers to help improve and renovate our schools while relying on our generous donors for funding to make it happen.

We recently commissioned the construction of over 50 brand new desks to help improve the children’s learning environment. To the left you see some members of our most recent volunteer group working on adding a brand new wing to our largest school in Port-au-Prince. 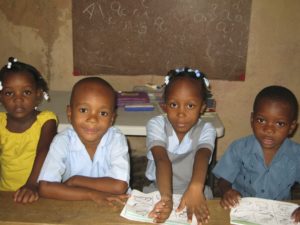 The Souvenir Children Foundation of Haiti, Inc was named after Souvenir Simon Jean Baptiste, a dedicated Haitian educator who founded the Ecole Mixte Nazareth 50 years ago. The Ecole Mixte Nazareth, 4 eme Ave de Bolosse was started in 2011.The school has been growing rapidly. Every year a new class is added. It currently has about 150 students.